For the last entry I listened to an album with origins in Carnival on Trinidad: steel band music, preserved for posterity (thanks, Nonesuch!) as it was in the mid-1960s. No performers are mentioned by name on the album; it’s just The Westland Steel Band, so that the listener is encouraged to conceive of “music as culture” instead of as an account of the intersection of the complex lives of complex individuals.

The album I listened to this week—Indígena, featuring music by Tania León (b. 1943)—also has a connection to Carnival in the Caribbean, this time in Cuba. 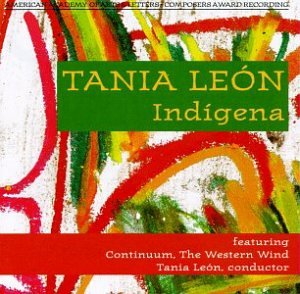 But perhaps it’s better to read the composer’s explanation of the work’s background: “Growing up in Cuba was a kaleidoscopic experience with sound. . .You have all of these revelers in the back of my home, preparing themselves for the Carnival. Even when I was actually trying to play Chopin or Tchaikovsky or, you know, I mean, Czerny, they would parade in front of the house, I would stop playing the piano, go, see the revels pass by, and when they pass by, we all dance, you know. And then, when they were gone, everybody went back to their chores. I went back to the piano; I continue practicing. . .Of course, upon my return [to Cuba, years later], I realize that the revelers were not there anymore, and these are just my memories.” [1]

In January 2018 there are lots of places one can go to read about Tania León’s life and career: her own website, Grove, several dissertations and scholarly articles. But here are three pieces of information, culled from those sources, to provide a bit of context or to send you looking for more. The first is reported almost every time León is introduced in print. She claims five distinct sources of heritage: French, Spanish, Chinese, African, and Cuban. She “take[s] pride” in each and “represent[s] all of them.” [2] Second, she was a founding member of Arthur Mitchell’s Dance Theater of Harlem and served as accompanist, and later music director, resident composer, and conductor of its orchestra. Third, León is currently working on a new opera—with libretto by Thulani Davis aided by “historical research” by Henry Louis Gates, Jr.—called Little Rock Nine, about those extraordinary black students who began attending Little Rock’s Central High School in 1957. [3]

What do we take from these three pieces of information? Something about race or ethnic identity? Something about musical influences? Something about the production of contemporary concert music in late-20th-/early-21st-century America? If you read any interviews with or writings about León, it quickly becomes apparent that she resists attempts to make her into the voice of a particular ethnicity (and/or gender). Marc Gidal discusses this at length in a 2010 article for Latin American Music Review, ultimately arguing that Homi Bhabha’s phrase vernacular cosmopolitanism is a useful concept for understanding composers such as León, finding in it a way “to join contradictory notions of local specificity and universal enlightenment.” [4]

Local specificity. Such as? Well, for example, in Indígena (from which the album takes its name), after a spiky and dissonant, almost Varèse-like opening, León “conjures up a comparsa, the group of revelers that roams the streets during Carnival season.” A solo trumpet even quotes an “authentic comparsa melody.” [5] This is local knowledge. And universal enlightenment? This is achieved through the expert use of orchestra—a sign for universalism, however problematic—with ample evidence of mastery of the musical modernist’s toolbox. Read against the interview with León quoted above, Indígena becomes more than a juxtaposition of distinct cultures, coming together for a multicultural extravaganza. A new creature is made, growing from exile and loss, memory and a wealth of contemporary experience. The title of León’s piece, Indígena, is not an answer, but a question. She is not saying, “Listen to my indigenous, Cuban authenticity in the context of a universalizing orchestral treatment.” Instead, she is asking us to consider what in-between place she is an indigene of, from what “cosmopolitan” city-state of the mind she has picked up all these intriguing elements. Those synthesized elements are capable of communicating broadly, in part because of connections they spark with people who recognize the individual elements, in part because her audience includes fellow in-betweeners who also live a synthetic existence. Indígena seems to ask the listener to consider how we all come to create our sense of belonging in this world when we’re made of so many fragments, disconnected from their original context.

Having felt myself invited, I journey. When listening to this album of León’s music, so many fragments and elements come to mind from the world of twentieth-century concert music. The second track, Parajota Delaté (1988), which means “For J[oan] from T[ania]” was written for the Da Capo Chamber Players, for which Joan Tower (b. 1938) was longtime pianist. The ensemble—flute, violin, clarinet, cello, piano—is of course the Pierrot ensemble, and the experience of listening to the piece for me was like listening to a telescoped version of Pierrot lunaire (1912), with textural, timbral, and rhythmic ideas pointing to specific songs in Schoenberg’s twenty-one-movement work. 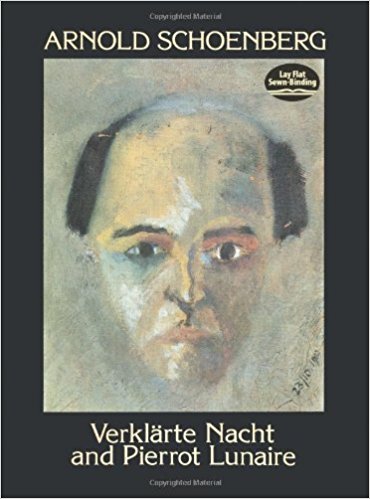 The connection is suggested in part because of the episodic nature of Parajota Delaté: a gait is established, then arrested and joined to the next by an interlude, as often in Pierrot. I hear fleeting references to “Enthauptung,” “Serenade,” “O Alter Duft.” Is León suggesting some alternate reading of the Pierrot narrative or exploring the ensemble in a way that playfully interacts with one of the touchstone works of the twentieth century? According to Ellen K. Grolman’s Grove article on Joan Tower, the composer “sometimes offer[s] musical salutes in titles of her works” (e.g., Fanfare for the Uncommon Woman, in response to Copland’s Fanfare for the Common Man), so there’s also a kind of echo in León pointing to Tower (and, more obliquely, to Schoenberg) through a work for her and her ensemble.

The only solo piano work on the album, Rituál (1987), seems to me to possess a sort of dance logic. The opening—sonorities built from accumulating ascending pitches—is like a body in a crouched position gradually opening up, gaining height and exploring space. A contrapuntal section with jazz-tinged harmonies gives way to a one that K. Robert Schwarz describes as having a “savage, brutal rhythmic power.” [6] That description of a solo piano work inevitably calls to mind Bartók’s Allegro barbaro (1911), though Bartók’s suite Out of Doors (1926) might be a more apt comparison. Then the next work on the album, León’s A la Par (1986), for piano and percussion, just as inevitably descends from Bartók’s Sonata for Two Pianos and Percussion (1937). Both A la Par and Bartók’s Sonata are in three movements, with a fast-slow-fast(er) design, and both find ample room for the atmospheric and the kinetic, though of course Bartók’s rhythmic drive draws from a different source. The two works inhabit different timbral universes, too, with Bartók’s score favoring timpani and “old-world” percussion and León’s highlighting “new-world” percussion (e.g., toms, marimba, vibraphone. . .bottles!)

The final work on the album, Batéy (1989), was written with “Dominican-born pianist and composer” Michel Camilo. 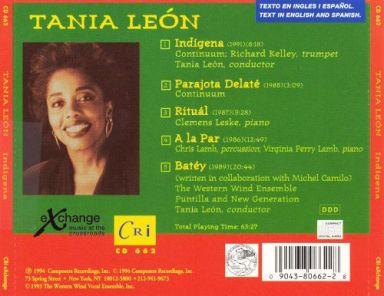 It’s a work of about twenty minutes for six amplified voices and percussion, on a text created by the collaborators in a mixture of Spanish, Yoruban, a Cuban dialect, “nonsense syllables,” and a little English. Sometimes it reminds me of Steve Reich’s Tehillim (1981), another work situated at the fruitful intersection of art music and a distinctive linguistic and spiritual heritage. In Batéy’s third movement, “Rezos” (“Prayers”), composed entirely by León, I hear a debt to Luciano Berio’s choral writing, particularly as found in “O King,” the second movement from Sinfonia (1969). The final word in “Rezos” is the English word “DREAM!” which references the famous speech by Martin Luther King. Why? A batéy is a slave village at a sugar plantation; the text of the piece fittingly centers on labor and oppression, on the one hand (and also weather, which perhaps signifies powerful forces beyond our control), and, on the other, the freedom achieved through ritual, community, and music. Perhaps this collection of ideas suggests parallels with the civil rights movement in the U. S., which in turn anticipates León’s current operatic project, Little Rock Nine.

2 thoughts on “Placing Tania León, Indígena of the In-Between”