From the opening bar of Mahler’s Tenth Symphony, we are plunged into a memory space populated by ghosts of the Prelude from Parsifal, the Prelude from Tristan, and the final movement of Mahler’s own Ninth Symphony. In fact, the opening of Mahler’s Tenth feels like a renewal of the conversation that Mahler had with himself in the Ninth. Like Hermann Hesse or William Faulkner or Terry Gilliam, there were certain topics that Mahler, once he had introduced them, simply couldn’t let go.

Of course it’s possible, however unlikely, that Mahler’s Tenth wouldn’t seem this way if the composer had finished the symphony himself. For over fifty years the world only had the colossus of an opening movement and the featherweight sidekick of a third movement, a self-effacing Allegretto with the bizarre appellation “Purgatorio.” Then Deryck Cooke (1919-76), who never finished his own planned study of Wagner’s Ring (mentioned in my last entry), made a performing version of all five movements of Mahler’s Tenth, which premièred in 1964 and was published in 1976. Other performing versions have been made, but Cooke’s is distinguished by being the first and having more than one famous name attached to it. Brothers David and Colin Matthews both helped revise Cooke’s orchestration to achieve something approaching a Mahlerian sound.

The recording I was listening to, incidentally, was of the BBC National Orchestra of Wales under Mark Wigglesworth, which accompanied the August 1994 issue of BBC Music. In some ways it makes a great deal of sense to listen to this live performance, as the 1964 concert that brought the fully realized Tenth to the world was part of that season’s Proms.

The three movements that Cooke’s completion introduced to that 1964 audience (II, IV, and V) make for a fascinatingly symmetrical form in performance: around 23 minutes for the first and last movements, around 11.5 for the second and fourth, and a four-minute middle movement. Mahler clearly intended this symmetry. The outer movements are slow and share with the last movement of the Ninth an autumnal atmosphere that ranges from desolation and despair to searing pain—including the most dissonant sonority Mahler ever wrote, out of which blazes a solo trumpet, which is then submerged again in a “poisoned” chord—to visions of paradise and achievement of rest. The second and fourth are scherzos, similar to the placement of the Nachtmusik movements in the Seventh Symphony. But unlike the Nachtmusik movements of the Seventh, which are clearly differentiated, the scherzos and slow movements of the Tenth, respectively, feel like siblings, so that the interrupted kinesis of the first scherzo is picked up again in the second, and the solemnity and scope of the first movement are picked up again in the fifth. The sense that any Mahlerite has from the first note of the Tenth—that this symphony is a return, after an “interruption” between symphonies, to the essence of the Mahlerian conversation—is mirrored in the finale’s “return” to the first movement’s manner, after the interruption of three movements, and in the fourth movement’s return to the scherzo language of the second movement after the interruption of “Purgatorio.”

In a symphony that blends Mahlerian tropes with extraordinary surprises, one of the things that surprises me most is the language of constant interruption that Mahler cultivates in the scherzos. Motives are cut short; phrases are arrested; cadences are unfulfilled. Mahler has created a style in which a sentence almost never ends; instead, it gets turned into another sentence, which itself does not end. There’s logic to this—a way of the music—but the logic is one of incompletion. What Mahler does with form at the largest scale, he also does with material at a local scale: incompletion has become a sort of aesthetic, made poignant because of the unfinished state in which the composer left the symphony.

What does incompletion mean? Is it a sign for nervous anxiety, the impossibility of positive action in the symbol-laden decaying world of fin-de-siècle Europe? I think people often feel compelled to read Mahler like that, to look for ways that the music expresses the extraordinary emotional contours of its creator’s thinking in a Freud-filled, angst-bedeviled prewar context. But I confess that as I was listening to the scherzos of the Tenth this week, thinking about the aesthetic of incompletion that they embody, I perceived not a neurotic rhetorical hyperactivity but an achievement of rhetorical emptiness. One can only follow so many changes of mood before the rapid-fire volte-face of happy face-sad face-happy face-sad face—emoticons spinning in a slot machine—loses its precision and ceases to mean in conventional rhetorical ways. It feels to me as if in these two scherzos Mahler is unhooking mode and gesture from rhetorical function. He seems to be trading in musical twists and turns shorn of their communicative inheritance, a world powerfully close to Schoenberg’s where musical extremes need not signify emotional ones. I increasingly hear the two scherzos of the Tenth Symphony as a kind of kinetic workshop, a place where the composer was thinking, through music, about where music was going.

And what does this mean for the diminutive “Purgatorio,” a movement that spends a good deal of time spinning its wheels, like Gretchen am Spinnrade, with an empty oscillating figure underlying more conventional statements of melody? This is clearly Mahler’s Lieder style, and arguably it’s a more specific reference than that, but it’s so strange to hear this between the boldly fragmentary, proto-modernist scherzos, a leaky skiff bobbing along between Scylla and Charybdis. (Romantic metaphor-of-the-day award winner). I place the blame for this ridiculous metaphor squarely on Mahler.

He’s the one, after all, who called his middle movement “Purgatorio,” suggesting the epic scope of Dante’s Divine Comedy and practically begging a listener to look for an Inferno and a Paradisio. Or is it really the middle three movements that function collectively as a kinetic purgatory—a waiting place, an interruption—foil to the first movement’s hell and last movement’s paradise? Music musics, ultimately, and any narrative parallel fails to fully accommodate those qualities that make the music so extraordinary.

One of the extraordinary features of Mahler’s Tenth, the narrative significance of which is elusive, is the final movement’s shape, which begins and ends with expansive tempos and features a central Allegro moderato. This shape echoes the rhythmic profile of the entire symphony, an echo enriched and complicated by the resurfacing of motives from earlier movements in the finale. There can be no question of the “validity” of a narrative reading here; Mahler brewed up such a complicated potion that one must simply accept that multiple readings, resonances, visions and revisions abound. Mahler has created a space constituted of reflections and refractions, making the nature of any one fragment difficult to pin down.

I’ll mention just one more such feature, which seems more powerful to me the more I hear this symphony. One of the principal motives of the last movement is a trumpet figure, another in a long line of funereal brass motives whipped up by Mahler. 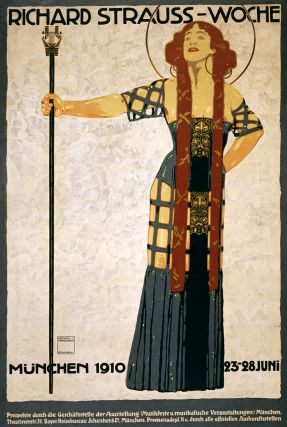 But this one bears a striking resemblance, I think, to the motive from Richard Strauss’s Salome (1905) that Lawrence Gilman called the ¡¡¡EnTiCeMeNt!!! motive in his 1907 guide to the opera. In isolation, the connection would perhaps merit little attention, but taken with the bass drum hits that open Mahler’s finale and the return of the “poisoned” chord, both of which have parallels in Strauss’s score, I cannot resist the comparison. (It’s the bass drums, remember, that crush Salome with their shields [or something like that], and who can forget the “poisoned” chord when Salome kisses the forbidden fruit, the severed head of Jochanaan?) When Mahler was sketching his Tenth the music of Strauss’s operatic success de scandale was all the rage, and Mahler certainly knew the score well. What’s Mahler doing here? Perhaps he’s contemplating, through music, another recent development in music, in just the same way that the internal scherzos reflect a kind of Schoenbergian shearing of aspects of signification from musical gesture. If Mahler is thinking about Strauss in the finale of his Tenth, the music is too potent, too evocative and immediate not to spark narrative dimensions. What forbidden fruit has Mahler’s symphonic protagonist tasted to be crushed in this way? Whatever it was, Mahler himself didn’t live to taste it. In listening to the last movement, we hear Mahler from beyond the grave, expressing things he did not have the time to express.