Here’s the strange assignment I set myself. To listen critically to the late music of Lord Berners (1883-1950), the “last eccentric,” the “English Satie.” Friend of Stravinsky—you can read their published correspondence!—diplomat in the foreign service from 1909-20, painter whose exhibitions graced London’s Reid and Lefevre Galleries, novelist and autobiographer. Oh, and ¡¡¡LoRd!!!, by Jove. If you want a taste of the sort of thing at which his lordship excelled, give ear to the ballet suite from The Triumph of Neptune (1926) in this classic recording from 1937 of the London Philharmonic under the sympathetic baton of Sir Thomas Beecham. Fun, dry, spiky, clever—this is precisely the kind of Berners of which Master Igor was thinking when he condescended to note that it was “as good as the French works of that kind produced by Diaghilev.” And who of us, I ask you, wouldn’t blush at such condescension?

A particularly pedestrian method led me to late Berners. After lounging last week on Alcina’s island and mulling over Bloody Mary the week before that, and, after having observed that both are basically Circe stories, I thought it might be fun to search around for “siren” music. You know, in keeping with the lure-you-to-your-demise-through-song kind of thing. One spreadsheet search, et voilà: the complete ballet of Les sirènes (1946), Berners’s last ballet, penned and premièred just a few years before his death. Philip Lane is nice enough to include writer-choreographer Frederick Ashton’s full draft synopsis in the liner notes for this recording by the RTE Sinfonietta under the direction of David Lloyd-Jones, but it doesn’t get a listener very far. One is left with the impression that it’s all very silly and slightly absurd without being particularly acerbic or pointed. Sounds like the English Satie, all right.

But here’s the rub. I don’t hear that same kind of silliness in the music. Set “at dawn on a French watering-place,” where “Sirens are sitting on a rock combing their hair and singing the latest waltz,” it sounds much less like a sardonic play on conventions and much more like an affectionate longing for the time that gave them birth, a valentine shot backwards across the unfathomable darkness of the war.

And how could I ever convince anyone of such a claim?

It’s tricky. Berners is clearly enamored of Debussy in Les sirènes: He borrows heavily from the sonic environment that Monsieur Croche unforgettably established in the first movement of La mer (1905). That makes sense, of course; the Sirens are at a beach, and a French one at that. But then they start singing a waltz. Really, they do: Berners asks for a wordless women’s chorus in what I suppose is another bow to Debussy, or else to Ravel. (Too much to hope that he would make a bow to Holst!) The waltz itself doesn’t sound like anything Debussy or Ravel would ever have written—La valse is light years away. Nor does it sound like the Waltz King cutting a belle époque rug. It does, however, sound a bit like Richard Strauss’s waltz language in Der Rosenkavalier, minus the opulence. And what does that leave us with? The foam-flecked waters of Debussy’s La mer with a splash of women’s chorus from the “Sirènes” of Trois Nocturnes, plus a well-behaved version of Richard Strauss’s nostalgic waltz idiom, all conveyed with a Satie-like knowing wink?

Berners’s most remarkable accomplishment, I think, is in skillfully creating a stylistic amalgam that sounds like a style, like a consistent voice. The problem is that the smoother the “joins” between styles, the less opportunity to mug for the camera, and so the less the music matches the absurdity of the scenario. In Peter Dickinson’s article on Berners for Grove Online, he explains that the English Satie “felt demoralized by the onset of war and told Gertrude Stein that he felt ‘confronted with the breakdown of all the things that meant anything to me.’” If this was true when Berners was writing Les sirènes, it must have been difficult to muster even a knowing wink.

Not difficult at all, though, or at least not emotionally dishonest, to affectionately craft a sort of pastiche-synthesis from the sounds of that loved and lost prewar world. Lane writes in his liner notes that Les sirènes, the first new work given by Sadler’s Wells Ballet at Covent Garden, by one of the only two Brits ever commissioned by Diaghilev, was “not a success,” “deemed to have been have out of touch with the times.” What does that mean, I wonder. I can’t help but think of the sound and character of Peter Grimes, which had its première at Sadler’s Wells the year before Les sirènes (albeit at a different location). It’s hard to think of the two works inhabiting the same two years, much less the same city, all while sharing the name Sadler’s Wells. The world was indeed changing. 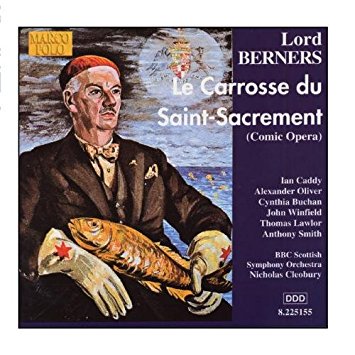 This disc of late Berners also includes the suite from his ballet Cupid and Psyche (1938), which displays just as much craft, shares with Les sirènes a delight in dance and dated national styles (Viennese waltz, “Spanish” music through a Parisian fin-de-siècle filter, the occasional touch of Offenbach or Tchaikovsky). My favorite moment is the Entr’acte, which apparently depicts Psyche in her custom-made palace, where “she lives happily awhile.” The music is atmospheric, placid, suggesting a place outside of time. The flute solo that flits over the top of the gently rolling texture cleverly calls to mind another placid Entr’acte with a flute solo, the one from Carmen. The other piece on the disc, Caprice Péruvien, was arranged by Constant Lambert from Berners’s opera Le carrosse du Saint Sacrement (1923). It’s generally an essay in the “Spanish” mode so loved by early twentieth-century French composers, but without the strange magic of, say, Ravel’s Rapsodie espagnole. It’s a bit of a task both to shake one’s perception of the nonsensical use of this idiom for the story of a commedia dell’arte troupe in eighteenth-century Peru and to forgive the music for not being Ravel, but if one can do all that, Berners’s undeniable fluency and apparent delight in writing in familiar idioms come through.